In the summer of 1883, several families living along Bethany Lane who were meeting in a small school house felt led to construct their own church. The Reverend Ezekiel Richardson, pastor at Emory Church in Ellicott City, who had been ministering to the small congregation, met with members Aaron Mackenzie, Joshua Mullinix and Jesse Rhine to formulate plans for a new church building. Land was donated by Adam and Sarah Noll (ancestors of Doris Jean Jackson).

Construction began on October 14, 1883, and was completed in about eight weeks. Materials and labor were donated by church members and many families from nearby farms. The building was constructed on fieldstone foundation walls. The timbers supporting the floor appear to be hand-hewn. The walls and ceiling were finished in wood-lath (horse-hair) plaster. The exterior of the building was covered in white clapboard and the windows were accented with green shutters specially made to match the unusual shape of the windows.

Around 1890-91, the vestibule was enlarged and the belfry added. By 1905 a classroom was added on the south side of the building. During the early years the building was heated by a wood stove. In the 1930’s a coal-burning furnace and electricity were added.

In 1955 the classroom addition was constructed on the east side and the building was equipped with bathroom facilities and a central heating plant. Since then, renovations and improvements have been made, including installation of aluminum siding. In 2008, a modern, efficient oil-fired boiler replaced the 1950s vintage burner and boiler.

Pictures below are from 2003 when the major portion of the main building was constructed, adding all the offices and classrooms, rotating the main sanctuary 180 degrees, and creating the footprint that is currently in place.

In 2009, the chapel was restored to preserve the integrity of the building and return the plaster walls to their original condition. 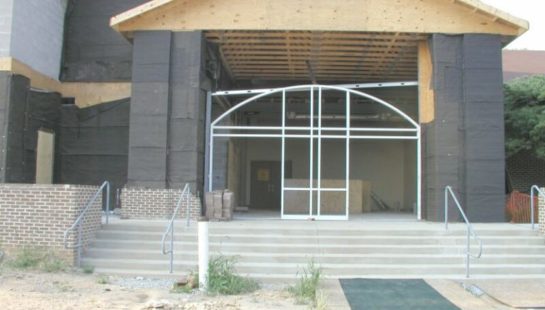 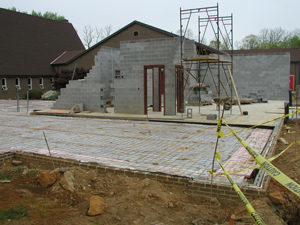 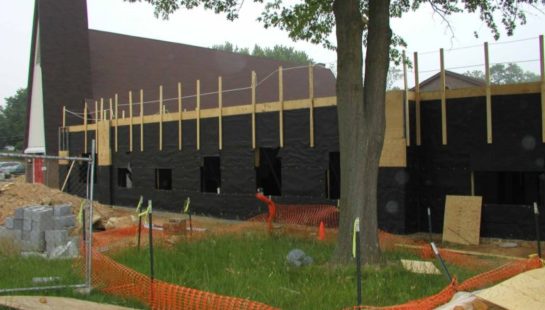 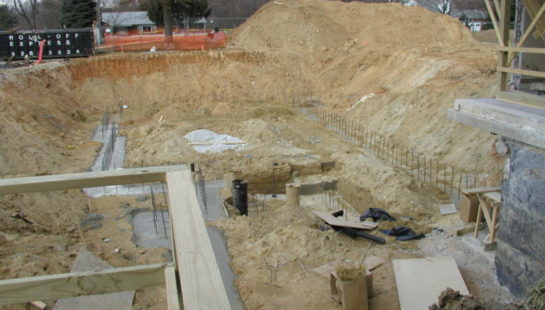